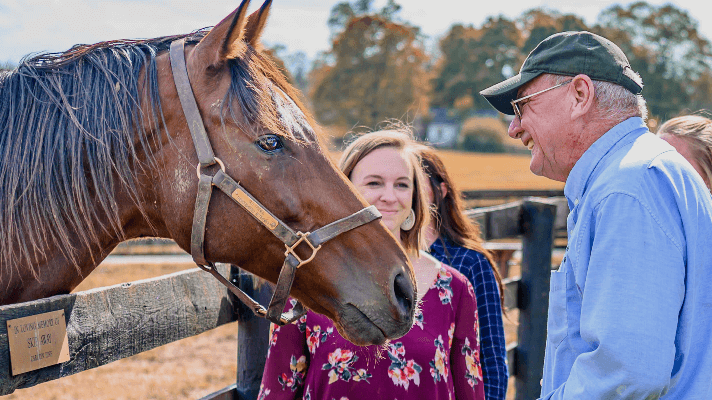 In 2020 the racing world lost a legend with the passing of Kentucky Derby and Preakness winner War Emblem. Thanks to the work of Old Friends Thoroughbred Retirement Farm in Georgetown, KY, the beautiful black stallion that retired with 13 starts, seven wins and earnings of nearly $3.5 million was able to live out his remaining years in comfort, companionship and with excellent health care – which is not always the case for these once-celebrated horses. 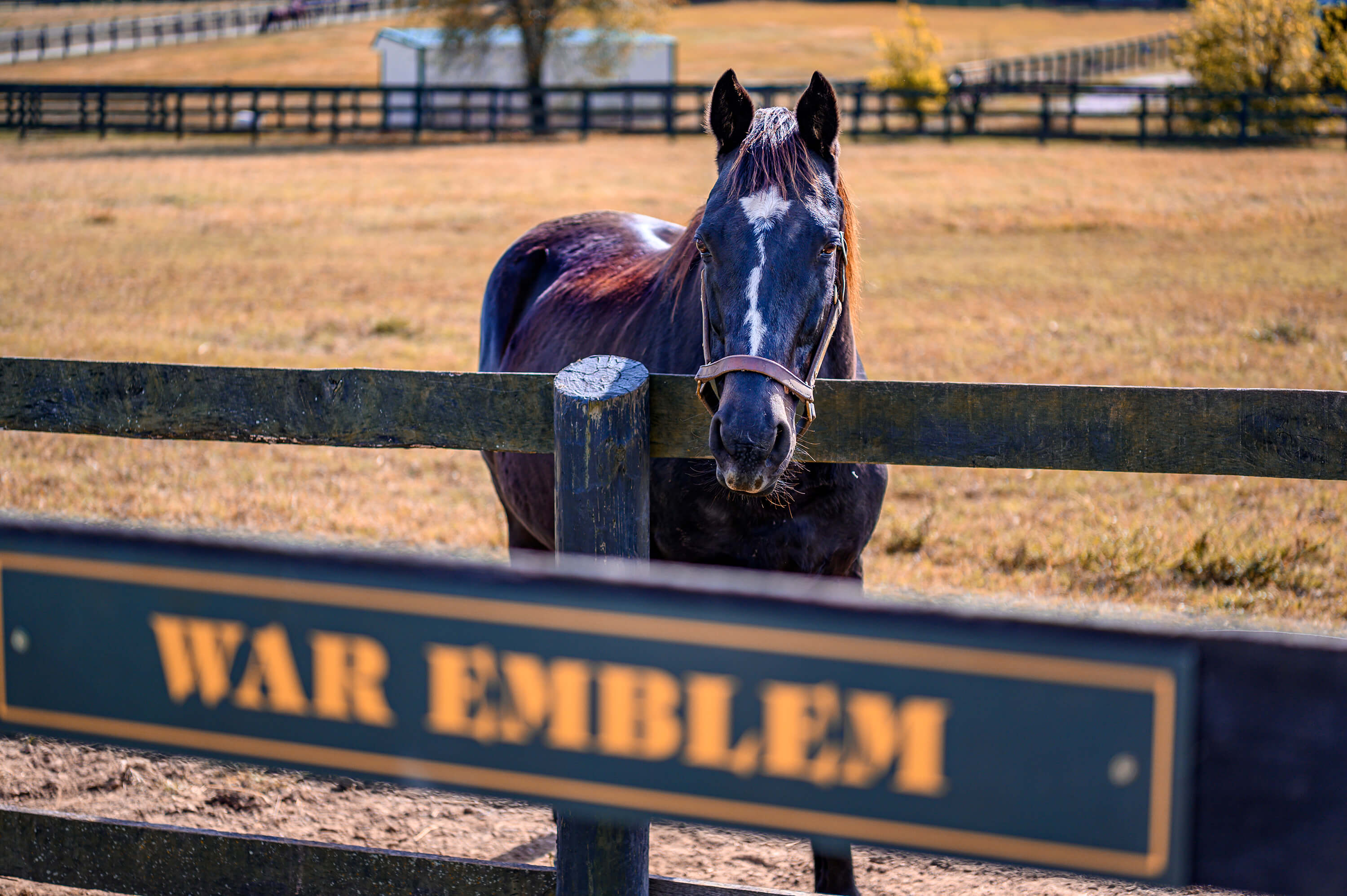 “We were very proud to be given the opportunity to repatriate War Emblem when his stallion career came to an end, and we were lucky enough to have him with us for nearly five years,” said Old Friends’ founder and president, Michael Blowen. He noted the entire staff misses the spirited thoroughbred, whose behavior farm manager Tim Wilson once compared affectionately to that of a “spoiled kid throwing a tantrum in a toy store.”

Added Blowen: “His great speed, great beauty, intelligence and distinct personality made him one of our most popular and beloved retirees, visited by hundreds of fans weekly, even in our off season.”

The former Boston Globe film critic founded Old Friends Thoroughbred Retirement Farm in 2003 with a leased paddock and one horse. His goal: provide a dignified retirement in a nurturing environment to thoroughbreds like War Emblem whose racing and breeding careers have come to an end. Today, about 175 rescued and retired horses live the good life on what has grown to a 200-plus-acre facility.

Fittingly, Old Friends’ Georgetown home is located in a place known as Kentucky’s Horse Headquarters for its abundance of equine-related farms, riding stables and events, such as the Festival of the Horse, which celebrates its fortieth anniversary this September. Additionally, horsey attractions include two high profile galleries – the Steve Hockensmith Fine Art Gallery and the Robert Clark Gallery – that specialize in equine art. 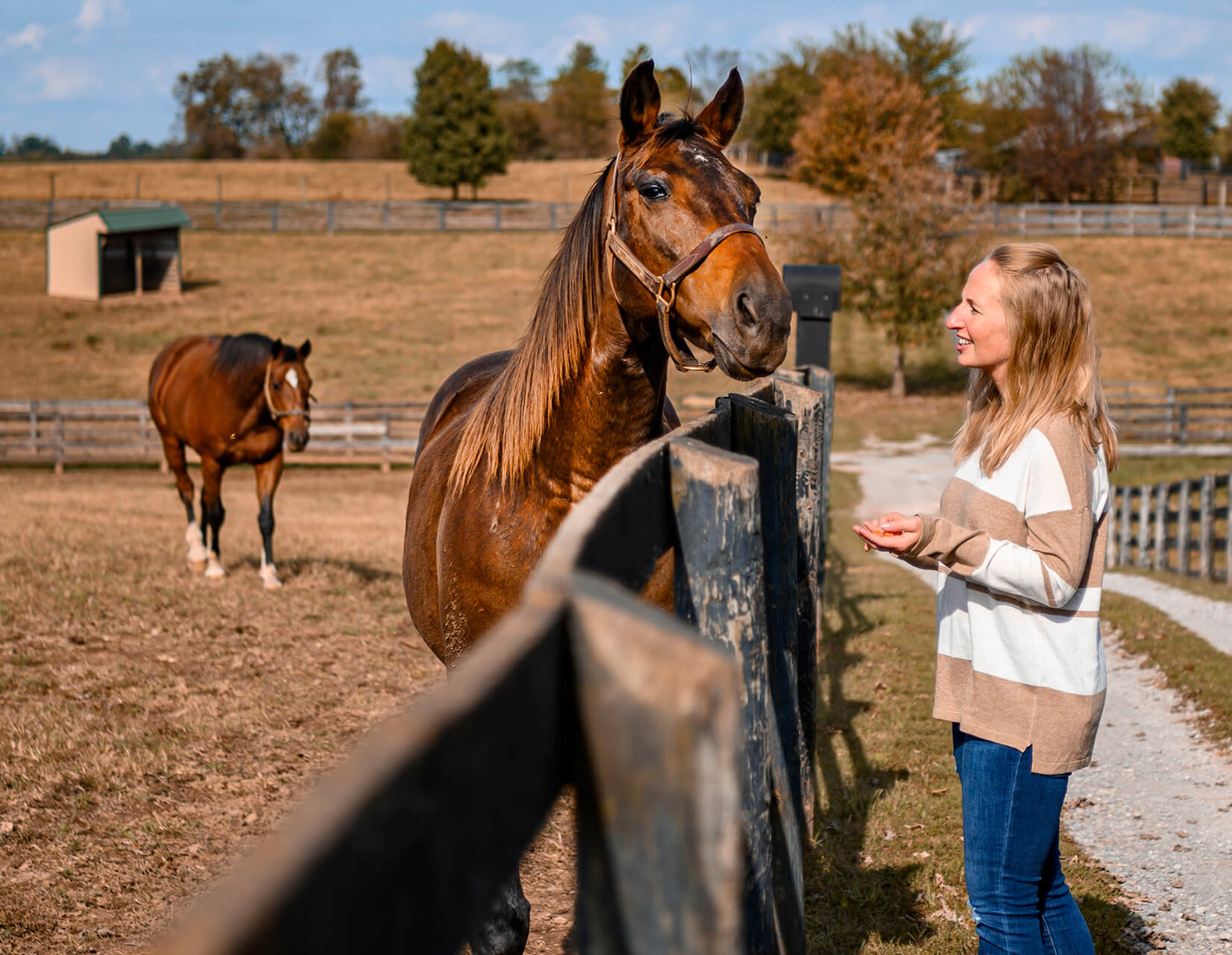 War Emblem was among many four-legged luminaries that have taken up residence at Old Friends. In fact, Sarava, the long-shot colt that beat War Emblem at the 2002 Belmont Stakes – considered the biggest upset in its 134-year history – spends his days cavorting in its paddocks, as did fellow retiree Popcorn Deelites (Popcorn Deelites passed away in early 2022). This blood-bay’s claim to fame was more Hollywood than horse racing: Popcorn Deelites was the equine thespian who co-starred with Tobey Maguire and Jeff Bridges in the 2003 Oscar-nominated movie, “Seabiscuit.”

A treat for many visitors to Old Friends is seeing the farm’s spunky official “spokeshorse” and bestselling author, Little Silver Charm. The miniature horse, named after the tenacious 1997 Kentucky Derby and Preakness winner and 2007 inductee into the Racing Hall of Fame, Silver Charm, co-wrote A Charmed Life. Chronicling the story of Old Friends, the book was penned with an able assist from former Boston Globe columnist Diane White, co-owner of Old Friends and Blowen’s wife, and features highlights from Little Silver Charm’s wildly popular Facebook page along with award-winning photography.

Although farm tours have been suspended due to the Covid-19 pandemic, Old Friends remains busy tending to the champs in its care. 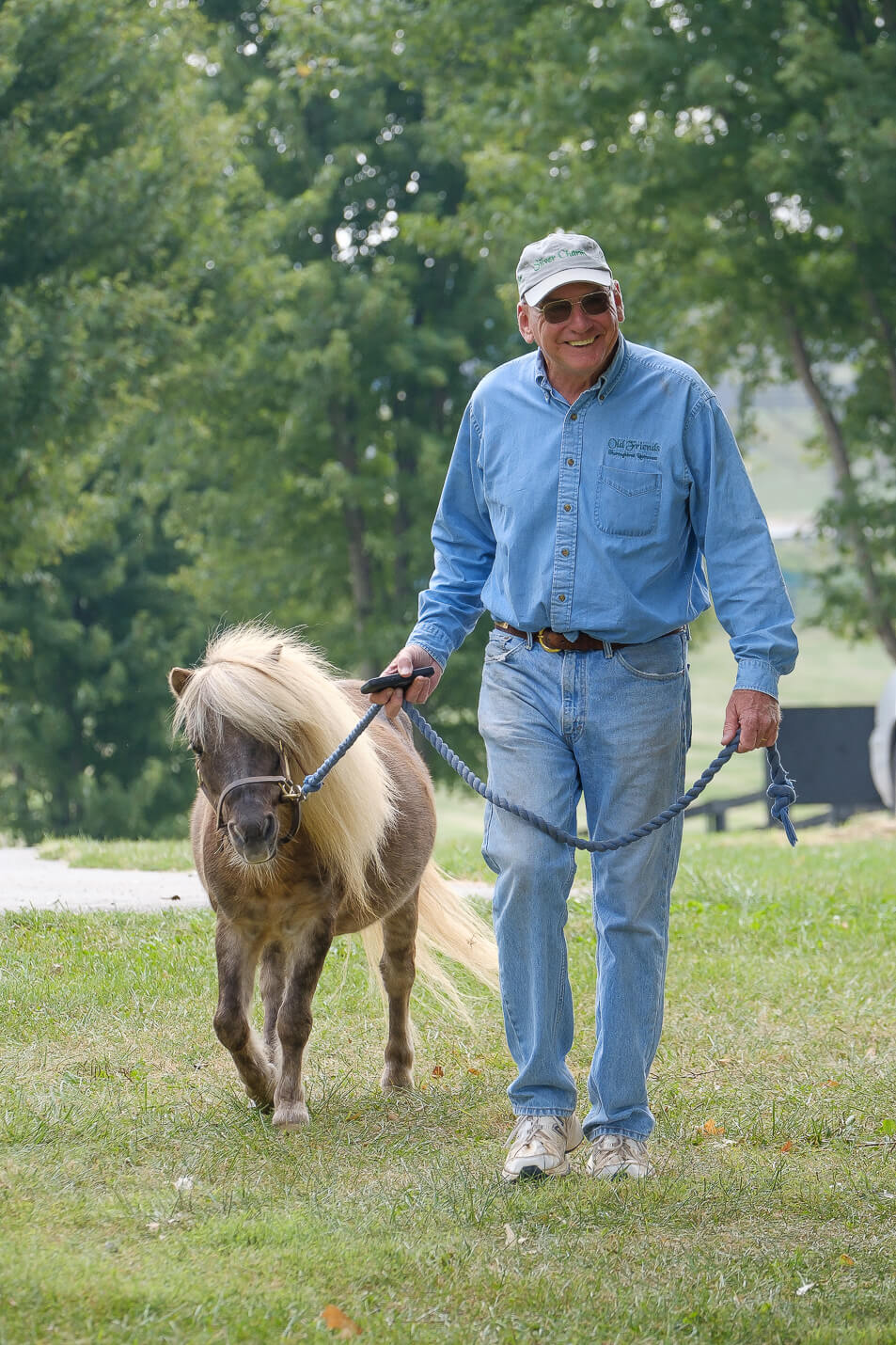 “My whole job now is cutting up a hundred pounds of carrots a day and making sure they’re distributed,” said Blowen. “We appreciate the quiet, but miss our visitors.”

He’s not the only one. Although the retirees, including Game On Dude, three-time winner of the Santa Anita Handicap, and 1996 Breeders’ Cup Classic winner Alphabet Soup, enjoy each other’s company, Blowen says they also miss the fans who would come to the farm, feed them carrots and generally lavish praise and attention on them.

“The horses are all doing well and are in great health and they’re so easy to get along with – just give them grass, carrots and water,” said Blowen. “But they’re missing the people.”

Once the pandemic crisis is over, and the farm reopens for touring, visitors will find their “old friends” – like 1997 Belmont Stakes winner Touch Gold; Dinard, a top contender on the 1991 Derby trail; and Zippy Chippy, the beloved “losingest” horse who racked up a zero for 100 record – along with some new friends.

“When this is over, what you can expect is the closest thing you can get in Times Square on New Year’s Eve, in Georgetown KY,” Blowen said. “We’re going to have all these new horses and a huge celebration. By that time, I won’t like the quiet at all and will be ready to make some noise.”

In the meantime, there are a number of ways to experience Old Friends:

• Virtual-visit with Dinard and Archie’s Echo, a modest competitor who was rescued from a slaughter auction facility, here.

• Get an idea of the breadth and scope of Old Friends on a virtual tour of the rolling pasturelands and the home-sweet-home stables of the retirees at https://destination.tours/old-friends-equestrian-retirement-center.

• Learn the history and pedigree of all the residents, including Alphabet Soup, Popcorn Deelites and Silver Charm – big and Little – on the Old Friends website at www.oldfriendsequine.org.

• Visit the Old Friends bookshelf where a half dozen books share the stories, the art and the heart of this non-profit organization, including The Art of Old Friends, a collection of paintings by Old Friends Artist-in-Residence Dagmar Galleithner-Steiner; History of Old Friends A Home for Retired Thoroughbreds by Rick Capone; and A Charmed Life by Little Silver Charm.

• See the programs that have been created to help support the champs in their retirement, such as the Old Friends Hoof Patrol and the Old Girlfriends Society.