Kentucky’s fastest-growing city has historically been an overachiever. From its earliest days, stretching back 450 million years to the Ordovician Period when the area lay beneath a shallow sea, the land that would become Georgetown/Scott County distinguished itself with rich and varied forests and salt licks and springs that enticed an abundance of bison, elk and black bear.

Native peoples have lived, hunted and fished along the lush and temperate banks of Elkhorn Creek in what is now Scott County for at least 15,000 years. (Of course the creek is the longest in the state.) In particular, the Adena culture (800 B.C.-800 A.D.) thrived in the area, with several significant Adena mounds still marking the presence of this pre-Columbian Native American culture.

Exploration by people of European ancestry can be traced to the June 1774 arrival in Kah-ten-tah-teh (the name given to Kentucky by the Wyandot Indians) of John Floyd, a surveyor for George Washington, and his expedition party. At that time, all of Kentucky was part of Fincastle County, the largest and westernmost part of Virginia.

“The spring is the largest I have seen in the whole country, and forms a creek in itself,” noted a passage in a journal kept by a member of the expedition party.

A year before the Declaration of Independence was signed, in 1775, settlement attempts were made in the area, but it wasn’t until the winter of 1783 that a permanent community was established at Johnson Station near the North Fork of Elkhorn Creek – approximately five miles west of present-day Georgetown. It was eventually renamed Great Crossings because of traversing buffalo herds, but the name wouldn’t last long, thanks to an entrepreneurially-minded, fiery-tempered Baptist preacher from Virginia named Elijah Craig (1743-1808).

In 1784, Craig incorporated a town he called Lebanon in the Virginia Legislature. That name didn’t last either as it was changed to George Town in 1790 in honor of the first president of the United States: George Washington. Two years later, in 1792, when Kentucky became the15th state of the union, it became George Town, Kentucky.

That same year, Scott County became one of the first two counties created by the newly formed Kentucky Legislature. It was named for General Charles Scott, a Revolutionary War hero who was called out for “corrupting the morals of our youth” and as “one of the wickedest men I ever saw,” depending on whom you asked. He would later serve as the Commonwealth’s fourth governor, from 1808 through 1812.

From bourbon to Buffalo Soldiers

But back to Craig, who probably set Georgetown/Scott County’s already overachieving nature into overdrive. Craig is credited with these firsts: first classical school in Kentucky, founded in 1788; first ropewalk; first saw, grist and paper mills; and first fulling mill, which has to do with cleansing cloth. His biggest first? Producing bourbon whiskey, distilling the spirit in 1789 at the site of Royal Spring Park, located in present-day downtown Georgetown.

The school Craig founded was later absorbed into Rittenhouse Academy and later still, in 1829, into Georgetown College, the first Baptist college west of the Allegheny Mountains (and possibly one of the very few with ties to bourbon).

Georgetown continued to distinguish itself after Craig’s death in 1808 – but not in a way that made all its citizenry happy. Spiraling into decline, the community was 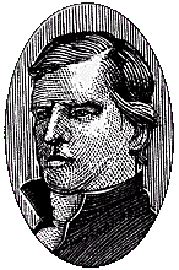 described as “notorious for its wickedness and irreligion” by Elder Barton Warren Stone. He had moved to Georgetown in 1816 to become principal of the Rittenhouse Academy.

Things calmed down eventually and Georgetown College started making a name for itself, first as an innovator in the superior classical education it provided and, in 1898, as one of the first such institutions in the South to become coeducational.

Throughout the nineteenth century, Georgetown’s cultural and economic life – the latter based on tobacco, milling, distilling and the rope and bagging businesses – was closely tied to that of the Deep South. While Kentucky remained officially neutral during the Civil War, Scott County’s leanings were Southern. Following the war, many Scott County African Americans took part in the “Great Migration,” with many settling in the newly formed, all-Black community of Nicodemus, Kansas.

Life in the Great Plains was one of hardship, however, and many would eventually return to Scott County and the new African American-settled communities of Zion Hill, Watkinsville and New Zion. Several of these residents joined the 9th and 10th Cavalries and the 23rd and 24th Infantries. These were the legendary Buffalo Soldiers, established by Congress as the first peacetime all-Black regiments in the U.S. Army. The name, “Buffalo Soldiers,” was given to them by Native Americans in the late 1870s and marks a place of honor in U.S. history for those who served. 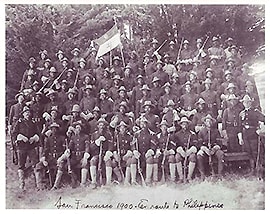 The county keeps on keepin’ on

While Georgetown was growing, other communities in Scott County were also flourishing. In 1834, Stamping Ground – so called for the buffalo herds that would gather at the salt spring and stomp the ground while waiting for water – was incorporated.

Sadieville, once called “The Big Eagle,” was formed in 1879 in the northern portion of the county as a rail stop along the Cincinnati Southern Railroad. The city was named in honor of Sadie Emison Pack, who played hostess to construction engineers working on the line.

Throughout the 20th century, Georgetown and Scott County have been in a transition from an economy based primarily on agriculture to a diversified one of manufacturing, small business and the family farm. During the 1960s, the construction of Interstate 75 placed the county right smack on one of the busiest highways

in America. Two decades later, in 1985, the selection of Georgetown as the site of Toyota’s first American assembly plant – and the largest Toyota Manufacturing plant in the world – resulted in the greatest period of growth in the county’s long and storied history.

And it’s not slowing down.

Today, Georgetown and Scott County remain proud of its past achievements and poised for an exciting future. We invite you to visit with us and experience our heritage.

A source for the research for this history was Scott County Kentucky – A History, published in 1993 by The Scott County Historical Society, Georgetown, KY. Lindsey Apple, Frederick A. Johnston and Ann Bolton Bevins, editors.