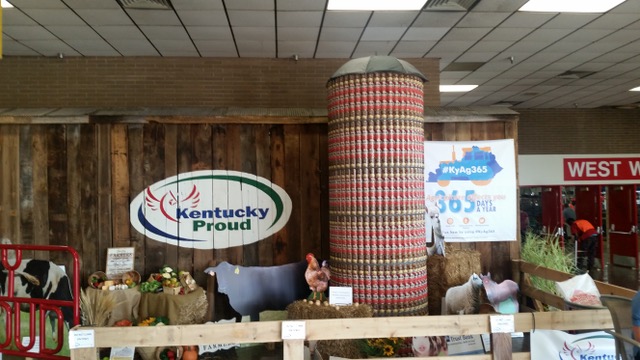 A Favorite Among State Fair-Goers!

Thirty-six thousand cups of freshly popped popcorn from Western Kentucky farms. One thousand, seven hundred cans of veggies and boxes of cereal donated to a Georgetown organization. Thousands of visitors munching popcorn and learning about the state’s farm and field heritage. Dozens of co-workers and volunteers helping to make an agriculture exhibit a 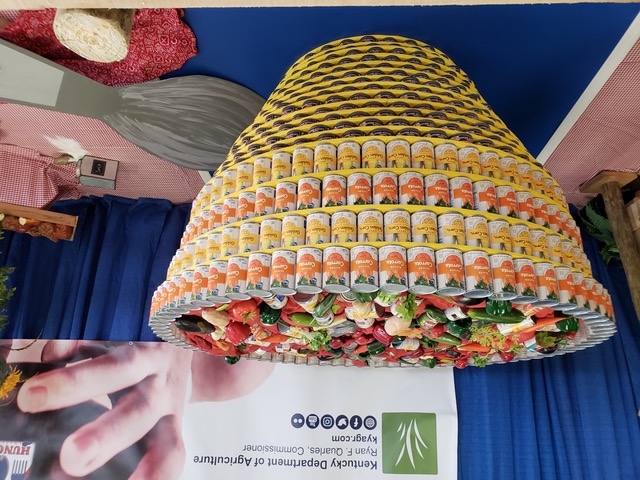 Each year, the Kentucky Department of Agriculture (KDA) builds one of the largest exhibits at the Kentucky State Fair. Sponsored by the Georgetown/Scott County Tourism Commission (GSCTC), it is located in AgLAND in the south wing of the fairgrounds, which features and highlights the commodity groups and the KDA and programs provided by the department.

The exhibit is known far and wide for the themed structure the KDA team builds each year from canned goods. A salad bowl filled with veggies. A giant ear of corn. An apple tree and an apple with a bite missing to demonstrate the Kentucky Hunger Initiative Exhibit’s goal to “take a bite out of hunger.” A towering silo – a favorite structure that has appeared frequently over the years and at various places. 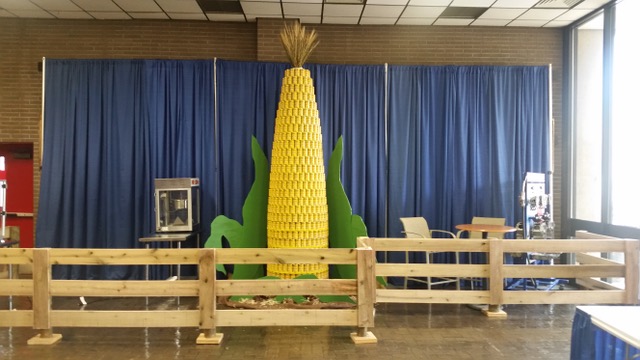 “We have fair attendees who look for the canned goods structures every year and that makes me really happy,” said Alisha Morris, KDA program coordinator. “I have one couple who says they come just to see the can structure displays and what we
have done new each year.

“We also have some who come every year just to see our same employees in the booth.”

Part of the draw might have something to do with the irresistible aroma of Kentucky-grown popcorn wafting through the building. Team KDA has an area within AgLAND where they pop the popcorn that has direct Kentucky farm impact.

Once the fair is over, the food including the canned goods is packed up and donated to the AMEN House.

Located on Main Street in Georgetown, AMEN House has one mission: to end hunger in Scott County. The organization is entrusted with the Emergency Food Assistance Program (TEFAP), a

federal program that helps supplement the diets of low-income Americans by providing them with emergency food assistance at no cost. USDA provides 100 percent American-grown USDA foods and administrative funds to states to operate TEFAP.